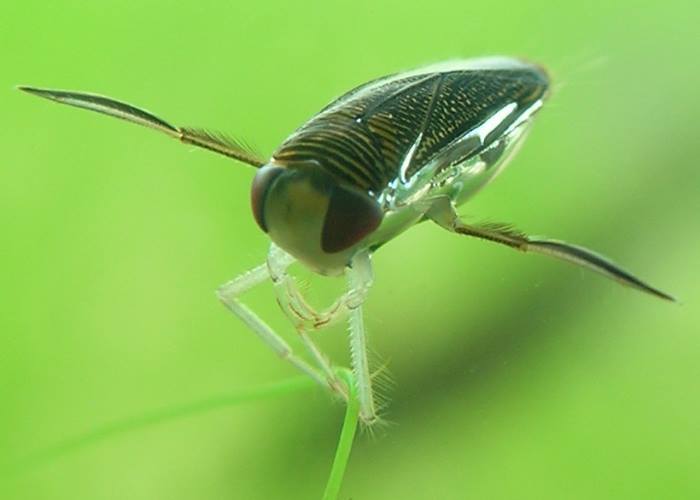 Corixidae is a family of aquatic beetle insects in the order Hemiptera that inhabit ponds and slow moving streams, where they swim near the bottom. There are about 500 known species worldwide, in 33 genera, including the genus Sigara.

Members of the Corixidae are known in the United States as water boatmen, a term that is sometimes used in the United Kingdom for Notonecta glauca, a bug of a different family, Notonectidae, and Corixa punctata is the "lesser water boatman".

Corixidae generally have a long flattened body up to 13 millimetres (0.5 in) long and have extremely fine dark brown or black striations marking the wings. They have four long rear legs and two short front ones. The hind legs are covered with hairs and shaped like oars, hence the name "water boatman". Their front legs are scoop shaped at the tip. They also have a triangular head with short, triangular mouthparts. Corixidae dwell in slow rivers and ponds, as well as some household pools.

Unlike their relatives the backswimmers, who swim upside down near the surface of the water, Corixidae swim right side up near the bottom of ponds or streams. It is easy to tell the two types of insects apart simply by looking at where the insect is in the water and whether it is swimming upside down or not.

Corixidae are unusual among the aquatic Hemiptera in that they are mostly non-predatory, feeding on aquatic plants and algae instead of insects and vertebrates. They use their straw-like mouthparts to inject enzymes into plants. The enzymes digest the plant material, letting the insect suck the liquified food back through its mouthparts and into its digestive tract. A few species of Corixidae are predatory, but the majority are herbivorous.

Some species within this family are preyed upon by a number of amphibians including the rough-skinned newt, Taricha granulosa.

The reproductive cycle of Corixidae is annual. Eggs are typically oviposited (deposited) on submerged plants, sticks, or rocks. In substrate limited waters (waters without many submerged oviposition sites), every bit of available substrate will be covered in eggs.

The lesser water boatman (Corixa punctata) is a water-dwelling insect of the order Hemiptera.

Adults normally range in size from 5 to 15 mm long, and are found in ponds, lakes and sometimes even swimming pools. The boatman feeds on algae and dead plant material. They have long hind legs which they use to swim on top of water. These powerful legs are covered in tiny hairs which helps them float on the surface of the water.

They breathe oxygen by trapping air beneath their wing cases when they are on the surface as the oxygen is trapped by tiny hairs. They use trapped air in their physical gill to convert water-borne sounds into airborne sounds that they can hear.

All text in this article is licensed under the Creative Commons Attribution-ShareAlike License. It uses material from the Wikipedia articles "Corixidae" and "Lesser water boatman".