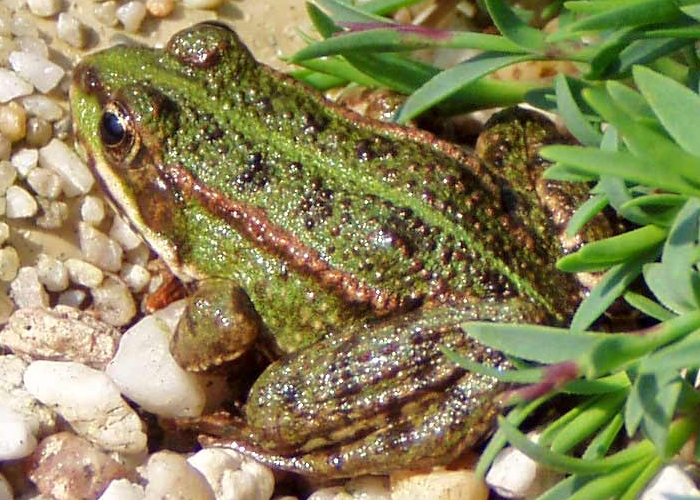 The Marsh Frog (Rana ridibunda) is the largest frog native to Europe, and belongs to the family of true frogs. It is very similar in appearance to the closely related Edible Frog and Pool Frog. These three species are often referred to as 'green frogs' to distinguish them from the other, more terrestrial, European Rana species, which are known as 'brown frogs' (best exemplified by the Common Frog Rana temporaria).

The Marsh Frog is a water-dwelling, generally green-colored frog species. It can reach a maximum length of 17 centimetres, but males remain smaller (around 12 cm). The head is proportionally large and the hind legs are long, which gives them excellent jumping abilities.

The diet of the Marsh Frog consists of dragonflies and other insects, spiders, earthworms and slugs. Larger frogs also eat mice, and sometimes salamanders and fish.

The green frog occurs in the largest part of Europe, in Asian Russia to Afghanistan and Pakistan and in the Chinese province of Xinjiang. They prefer a water temperature of approximately 15 degrees Celsius.

It is now distinguished from Rana kurtmuelleri (Balkan Frog), which it resembles greatly, and which outnumbers it in most of Greece.

All text in this article is licensed under the Creative Commons Attribution-ShareAlike License. It uses material from the Wikipedia article "Marsh Frog".