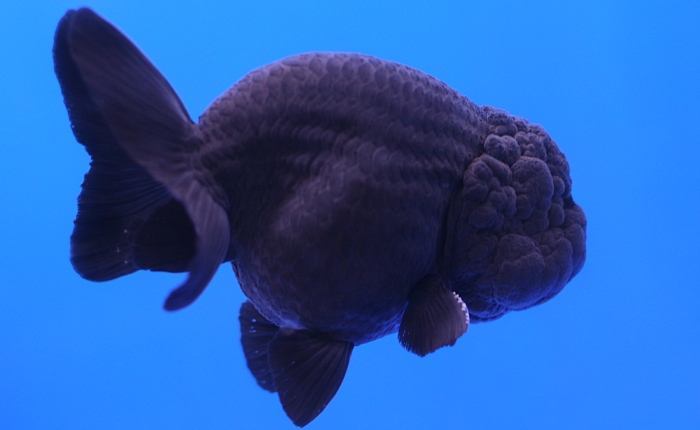 The ranchu is a hooded variety of fancy goldfish developed in Japan. It is referred to as the "king of goldfish" by the Japanese.

The modern-day ranchu is a Japanese development of the lionhead. They are the direct outcome of crossbreeding experiments of different Chinese lionhead specimens.

A ranchu has an egg-shaped body with a deep belly that is between 5/8 to 3/4 the length of the fish. This goldfish does not have a dorsal fin and breeding standards require that the back should not have any vestiges of the dorsal fin on it. The back should be rounded and not flat, as in the case of lionheads. The area of the caudal peduncle should curve sharply downwards to meet the tail. The caudal peduncle itself should be broad and neither lengthy or too short (a properly formed caudal peduncle avoids swimming motion impairments to this type of goldfish). The ranchu's tail meets the caudal peduncle at a forty-five degree angle, giving the fish a unique swimming motion. Furthermore, the tail lobes are rounded, and all other finnage are paired.

The most prominent feature of the ranchu is its head. There must be sufficient space between the eyes, and also from the eyes to the front of the head. The gill cover should figuratively extend quite far towards the tail. The headgrowth should seem to begin from the bottom of the gill cover and move upward. The headgrowths of young ranchu fry may take at least a year to develop. Young ranchus possessing broad foreheads and square noses generally produce better headgrowths. Mature ranchus can reach between 6 to 8 inches (15 to 20 centimeters) in length.

Ranchus may come in orange, red, white, red-and-white, blue, black, black-and-white, black-and-red, natural, and chocolate coloration. Scalation may either be metallic, nacreous (calico) or matte. Ranchus with a pale-yellow bodies and bright red heads are rare.

Ranchus are well-adapted to water quality and pH fluctuations.

Japanese, Thai, American and British ranchu breeders, as well as many prestigious goldfish-keeping societies, all adhere to two strict viewing classifications of the ranchu, namely: the top-view ranchu comportment and the side-view selection criteria. But Japanese aesthetic standards for ranchus are more exacting. Ranchus are interestingly compared to sumo wrestlers, who are large, fat and out-of-shape men with funny hairdos. Similarly, the ranchu seemed to be a big, fat and "out-of-shape" fish with funny headgrowth or "bramble-heads". However, traditional Japanese culture, aesthetics and concepts regard these attributes of both ranchu and sumo wrestler as an imposing and solid figure composed of massive circles and squares, which are abstract representations of balance, proportion, dignity, graceful movement and power.

The Japanese are firm believers that the best view of the ranchu is from the top. The ideal ranchu is described (when seen from above, not from the side) as similar to the koban, an elongated and oval-shaped (almost rectangular but with rounded corners) old Japanese coin.

A ranchu's back (seen from the side) is compared to a traditional Japanese comb, which comes in two shapes. The first comb-shape (the nagate or long style) is long with rounded corners and is similar to the koban coin. While the second comb-shape (the marute or the round style) is shorter, round and is similar to a round coin viewed from the side, but still not as round as any modern-day circular coins such as the penny or dime of the United States. Both comb shapes are acceptable in ranchu exhibitions and competitions.

Most goldfish shows and competitions judge ranchus in an aquarium setting, and judges view the fish from the side and the top, taking note of the fish's comportment and conformation to physical standards, motion and movements. The attachment of the tail to the caudal peduncle are also meticulously evaluated.

All text in this article is licensed under the Creative Commons Attribution-ShareAlike License. It uses material from the Wikipedia article "Ranchu".