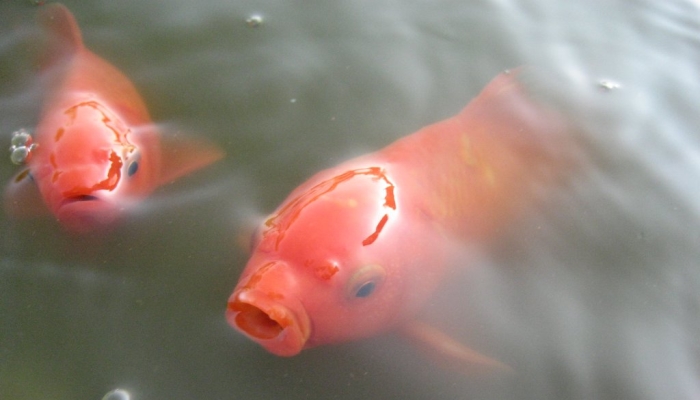 Common goldfish are a type of goldfish with no other modifications from their ancestors other than their color. Most varieties of fancy goldfish were derived from this simple breed. Common goldfish come in a variety of colours including red, orange/gold, white, black and yellow or 'lemon' goldfish.

Common goldfish are social animals who prefer living in groups. They are able to interact with any fish belonging to the same species. With provision of adequate care and attention, common goldfish can become tame. Once familiar with the face of its owner, swimming towards the fishkeeper during feeding time can be observed and hand-feeding becomes possible. Small goldfish will normally avoid any form of human contact. However, this fear ceases in a middle-sized and mature goldfish. A full-grown goldfish is more likely to eat directly from the hands of its owner without evident hesitation. Mature goldfish will also explore their surroundings through nibbling or grazing behavior.

Hierarchy during feeding is commonly observed in which the larger goldfish receives most of the food. However, small goldfish may also become aggressive or competitive feeders despite the presence of larger fish which is, in general terms, considered a good sign as a willingness to feed is indicative of a healthy goldfish.

It is a common practice to keep common goldfish in a small bowl but this allows waste in the water to build up to toxic levels and does not provide enough oxygen. They should ideally be kept in an aquarium of at least 10 gallons or 37 L with a good filter, and no heater, because these fish can get larger than 12 inches (34 cm). Tank recommendations range up to 75 gallons or 283 L. It is possible to keep small goldfish in smaller tanks, but such an arrangement will be very difficult to maintain once the fish grows older. If there is concern about the fish not getting enough oxygen, particularly when it is warm, an air pump with an airstone or bubble strip will work well. Goldfish will die without sufficient dissolved oxygen in the water. A filter that can do at least 10x filtration is best, which means that for every 10 gallons or litres of water, the filter should be able to cycle 100 gallons or litres per hour.

Goldfish are curious fish that will quickly become bored without items or other fish to interact with. If placed in a bare aquarium goldfish will settle to the bottom and only move when fed or frightened by sudden jolts. However, if put in a tank with sufficient gravel, aquarium accessories or plants (real or fake) they will make themselves at home. Adding a few companion fish will also help, but make sure each fish has plenty of personal space.

Goldfish are minimally territorial, so if your aquarium is already too small for one goldfish (see above recommendations), it will certainly be too small for two or more. Stress is not healthy for any goldfish. In a best case scenario, one or two fish will bully the rest so that they do not get enough to eat. Cannibalism is usually rare (such as when a fish is dying or dead) but in cramped, stressful situations, goldfish may behave unpredictably. Disease, of course, is possible anytime fish are stuck in small homes.

When adding goldfish to a new tank it is important to place no more than two at a time. This allows helpful bacteria (which turns ammonia to nitrite and finally to nitrate) to grow. If introduced in too great a number before these bacteria grow, the goldfish will die from breathing in too much of their own untreated excrement. Even after the development of the biological filter, it is necessary to change about 50% of the water at least one time a week, or as necessary to prevent a build-up of harmful nitrate. The addition of live aquatic plants may reduce the number of times per month one will have to perform water changes, but only if the plants are growing (they will uptake nitrate as a source of nitrogen).

Common goldfish can be kept in outdoor ponds throughout the year with similar care but they may become sluggish and stop feeding in the winter. This does not mean they are sick, but rather that their metabolism has slowed. The pond must not freeze solid and there should be an open spot in the surface ice to allow oxygenation of water. The ice should also not be struck, as this sends shock waves of sound pressure through the water scaring the fish.

Breeding common goldfish is relatively easy. In breeding condition the male will develop small white spots on his gill covers and the female will become plump. The male will chase the female until she releases her eggs, then the male will release milt and they will become fertilized. The eggs will then stick to any available surface. It is then best to remove the eggs to a separate aquarium as the adults are likely to eat them. When the eggs hatch into fry, they will need to be fed very small food such as hatched brine shrimp or a ready made fry food. As they grow bigger, they can eat finely crumbled fishfood. Eventually the pieces of fishfood can get bigger.

Common goldfish are usually hardy but can also contract diseases. These can be caused by poor water quality, overfeeding and overstocking. Goldfish are notoriously dirty, producing much waste, and continually stir up the substrate in their infinite search for food. In small aquariums, illnesses in common goldfish can quickly become fatal requiring quick and prompt treatment. Several symptoms can indicate sick fish such as cuts on any of the fins, a change in scale or eye coloration, excretions from the nostrils, scales are falling off or the fish frequently rises towards the water surface. Many specialty treatments are available in the market to manage specific diseases.

A well cared for Common Goldfish in a large tank or pond can live anywhere from 6-10 years, normally. Older Goldfish have been reported in some circumstances. A Goldfish by the name of "Tish" living with an elderly couple in the UK has surprisingly reached over 40 years old. With proper love, care and good breeding a Common Goldfish can live to be of great age.

Common goldfish are often used as live prey for predatory fishes such as oscars and piranhas. They are also fed to larger crayfish, turtles, and frogs. Sold at only about one inch long, they can be easily consumed by other animals. Relatively inexpensive, they are often bought in large numbers for this purpose. However, some animal sympathizers find it unacceptable to feed live goldfish to other predatory fish or animals. It may also be possible to spread any disease the feeder fish may have to the consuming animal.

All text in this article is licensed under the Creative Commons Attribution-ShareAlike License. It uses material from the Wikipedia article "Common goldfish".