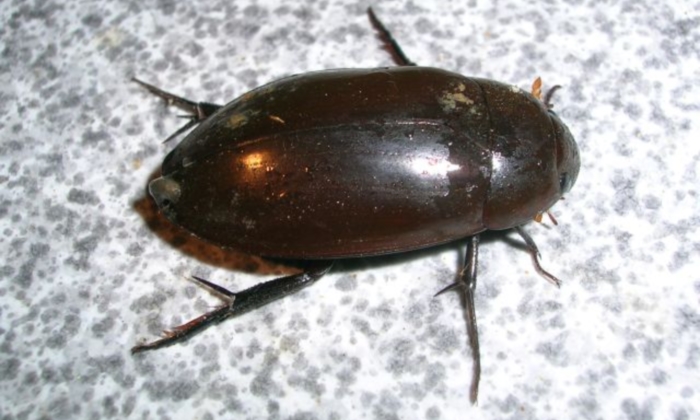 Water beetles are beetles that are adapted to living in water. Water beetles rise to the water surface and take atmospheric air into their tracheal systems. There are approximately 2000 species of water beetles. The rest marine species tend to live in the intertidal zone. Water beetles are black, brown, or greenish and .08 to 1.57 inches long.

Many water beetles carry an air bubble underneath their abdomens, which both provides an air supply, and prevents water from getting into the spiracles. Others have the surface of their exoskeleton modified to form a plastron, or "physical gill", which permits direct gas exchange with the water. The wing covers are usually grooved on the female and smooth on the male. They have fringed hind legs with hair adapted for swimming. Adults hibernate in underwater soil during a good portion of the year. Water beetles are attracted to lights at night.

Most families of water beetles have larvae that are also aquatic; many have aquatic larvae and terrestrial adults.

Water beetles belong to the order Coleoptera. True, or diving beetles make up the family Dytiscidae. Types in which the adults are not necessarily aquatic include Hydrophilidae, Lutrochidae, Dryopidae, Elmidae, Eulichadidae, Heteroceridae, Limnichidae, Psephenidae, Ptilodactylidae and Sphaeriusidae. A nickname that people call the water beetle is the water devil. Also because of there rapicity they are also known as water tigers.

All text in this article is licensed under the Creative Commons Attribution-ShareAlike License. It uses material from the Wikipedia article "Water beetle".