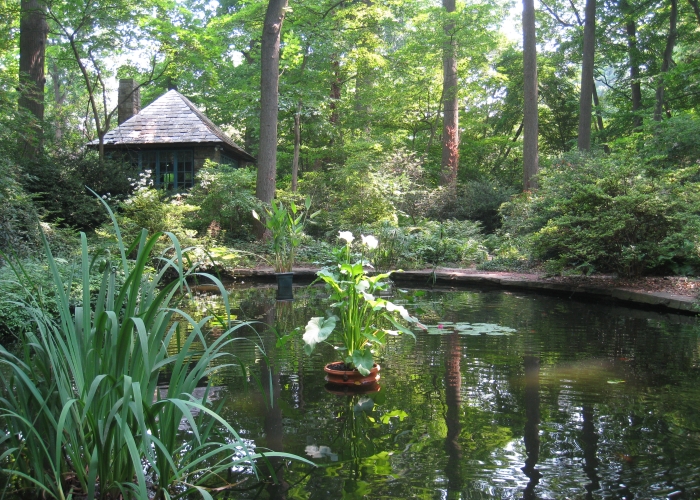 A garden pond is a water feature constructed in a garden, normally either for aesthetic purposes or to provide wildlife habitat. The UK charity Pond Conservation has estimated that there are about three million garden ponds in the UK.

Garden ponds can be excellent wildlife habitats. However, knowing how to make a good wildlife pond in practice is rather a matter of trial and error at present because there is remarkably little reliable information available about how to create good wildlife ponds. Despite the popularity of garden ponds, despite dozens of books and web-sites offering advice about making garden ponds, in fact there have been virtually no studies of garden pond wildlife, the best designs for wildlife ponds or of how garden ponds should be managed to maximise their value for wildlife. As a result of this, advice about the making of ponds for wildlife is plagued by the repetition of a range of myths about ponds. These myths were first identified in the early 1990s by Pond Conservation and described in an article in the magazine British Wildlife. The Garden Pond Blog, started by a member of Pond Conservation, aims to dispel some of these myths and help people make better garden (or backyard) ponds.

Although people often say that garden ponds make a great contribution to the protection of freshwater wildlife there is in fact no evidence one way or the other to determine whether this is really the case. This is because there have never been any careful studies made of garden ponds compared to ponds in the rest of the landscape. Because of this garden pond owners have the potential to make many original and valuable observations about the ecology of small waterbodies because so little is known about ponds generally, and specifically about the smallest natural ponds, which garden ponds replicate.

Not everything about garden ponds is good. Although invertebrate animals such as dragonflies and water beetles, and amphibians can colonise new ponds quickly, garden ponds also cause problems. In particular, garden ponds can be pathways for the spread of invasive non-native plants. In the UK the non-native species Crassula helmsii and Myriophyllum aquaticum, which cause considerable practical problems in protecting freshwaters, are both escapees from garden ponds.

Ponds may be created by natural processes or by people; however, the origin of the hole in the ground makes little difference to the kind of wildlife that will be found in the pond. Much more important is whether the pond is polluted or clean, how close it is to other wetlands and its depth, particularly whether it dries out from time to time and how many fish (if any) there are.

Naturally, ponds vary more in their physical and chemical conditions from day to day, and even during the day, than other freshwaters, like rivers. People often install pumps in garden ponds to counter these natural tendencies, particularly to maintain higher levels of dissolved oxygen: although this is probably not necessary for wildlife generally, it may be essential to keep fish in a small pond. For ponds with polluted nutrient-rich tapwater added to them, filters can be used to reduce the abundance of algae.

Ponds outside of gardens are fed by five main water sources: rain, inflows (spring, streams, ditches), groundwater and surface runoff. The wildlife value of ponds is greatly affected by the extent to which these water sources are polluted: the less pollution the better. Garden ponds are often filled with tap water; since water supplied for drinking often has high levels of nutrients which, when too abundant, pollute the pond, this gets the pond off to a bad start. Chemical pond treatments said to maintain the 'ecological balance' in ponds have rarely been carefully tested to assess their effects: although some of these treatments may have beneficial effects (for example, adding chalk to a pond polluted by phosphorus could precipitate the nutrient from the water and prevent it from being taken up by algae) most freshwater scientists would not currently consider these an effective solution to pond management problems.

Garden ponds are generally not fed by inflows or groundwater, except in the biggest gardens. Usually the pond will be filled by a combination of rainwater and surface runoff and lost to evaporation. One can make a garden pond/ koi pond that generally ranges in size from 150 gallons to around 10,000 gallons. However, if evaporation exceeds the amount of water added from rain or surface runoff, the pond may dry out during summer. This is not harmful biologically because many freshwater plants and animals (perhaps half of all species) are well adapted to periods of drought, and worldwide so-called 'temporary ponds' (ponds which usually dry out once a year) are an important natutral habitat type. However in a garden, a pond which dries out in summer may be a bit disappointing for the owner since this is the time when most people will be spending time enjoying their pond. And of course some animals, particularly fish, cannot survive periods of drought. Indeed, drought is nature's way of telling fish they are not wanted in a particular place! Amphibians, on the other hand, often benefit from ponds which dry out because this removes the major predators of tadpoles and newtpoles (fish) and, provided the larvae emerge before the pond dries out, the drought presents no problems for the amphibians.

In soils which lack natural clay, additional water loss to drainage and permeation is prevented by a liner. Pond liners are PVC or EPDM foils that are placed between the soil of the pond bed and the water. Liners can also be made from puddled clay, and ponds on free-draining soils can even be self-sealing with fine sediments washed into the pond.

All text in this article is licensed under the Creative Commons Attribution-ShareAlike License. It uses material from the Wikipedia article "Garden pond".