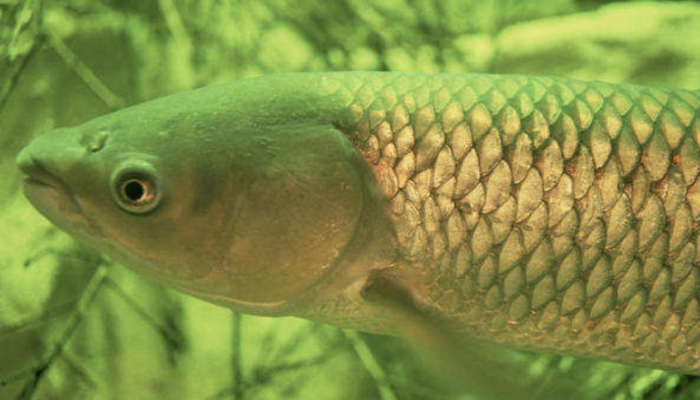 The Grass Carp (Ctenopharyngodon idella) is a herbivorous, freshwater fish. It is cultivated in China for food but was introduced in Europe and the United States for aquatic weed control. It is a large cyprind native to Eastern Asia, with a native range from Northern Vietnam to the Amur River on the Siberia-China border. It is a fish of large, turbid rivers and associated floodplain lakes, with a wide degree of temperature tolerance. Grass carp are usually thought to enter reproductive condition and spawn at temperatures of 20 to 30 C, but have been shown to sometimes spawn at temperatures as low as 15 C.

In the United States, the fish is also known as White Amur, a name developed to avoid use of the name "carp", which has derogatory connotations in North America. The name derives from the Amur river, where the species is probably native, but has never been abundant This is not to be confused with the White Amur Bream (Parabramis pekinensis) which is not a particularly close relative as Cyprinidae go.

The grass carp grows very rapidly, and young fish stocked in the spring at 20 cm (8 inches) will reach over 45 cm (18 inches) by fall, and adults often attain nearly 1.2 m (4 feet) in length and over 18 kg (70-90 pounds) in weight. They grow 10 pounds a year at least. They eat up to 3 times their own body weight daily. They thrive in small lakes and backwaters that provide an abundant supply of fresh water vegetation.

This species occurs in lakes, ponds, pools and backwaters of large rivers, preferring large, slow-flowing or standing water bodies with vegetation. In the wild, grass carp spawn in fast-moving rivers, and their eggs, which are slightly heavier than water, develop while drifting downstream, kept in suspension by turbulence. The eggs are thought to die if they sink to the bottom.

Adults of the species feed primarily on aquatic plants. They feed on higher aquatic plants and submerged terrestrial vegetation, but may also take detritus, insects, and other invertebrates.

The species was deliberately introduced into the United States in 1963 for aquatic weed control. It was introduced into New Zealand along with stocks of goldfish but the distribution is carefully controlled to prevent it from becoming a more widespread pest.

The Grass Carp is considered an invasive species in the United States, however it is still stocked in many states as an effective biocontrol for undesirable aquatic vegetation, many species of which are themselves invasive.

The species was introduced in the Netherlands in 1977 for aquatic weed control against overabundant weed growth. The release of grass carp into national waters is controlled and regulated by the Dutch Ministry of Agriculture, Nature and Foodquality. Because grass carp only reproduce in water of 25C°C, which is much higher than the water temperature reaches during the mating season in the Netherlands. Because of this, it is necessary to maintain grass carp populations by artificial means, which is done by the Dutch Ministry of Agriculture, Nature and Foodquality. Where grass carp populations are maintained through stocking as a biocontrol for noxious weeds, they should be returned into the water alive and unharmed.

When used for weed control, often the fish introduced to the pond or stream are sterile, triploid fish. The process for producing triploid fish involves shocking eggs with rapid change in temperature or pressure. This process is not usually 100% effective, therefore, in the United States, the young are usually tested for triploidy before being sold. Bait often consists of vegetables or fruits that are native to the area.

All text in this article is licensed under the Creative Commons Attribution-ShareAlike License. It uses material from the Wikipedia article "Grass Carp".