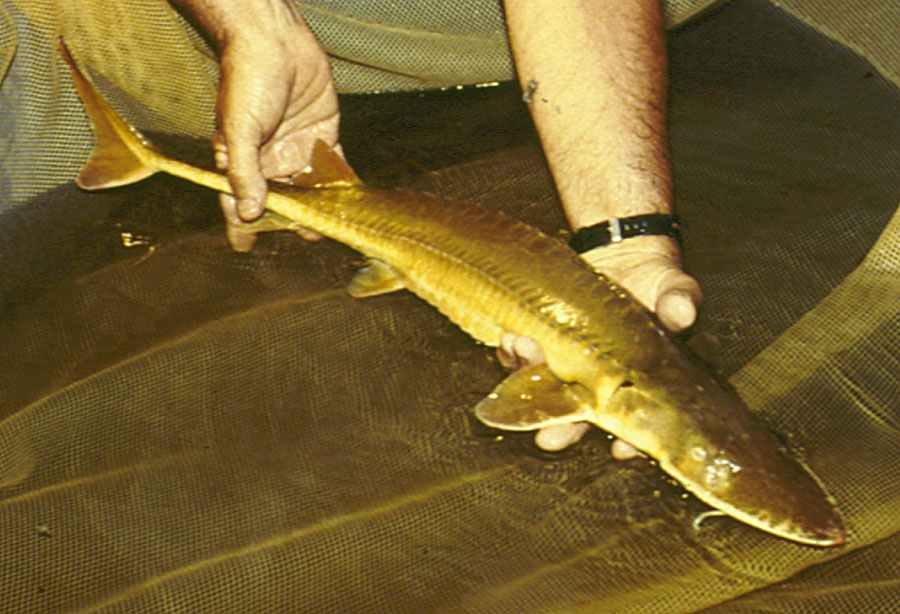 The Alabama sturgeon (Scaphirhynchus suttkusi) is a critically endangered species of sturgeon native to the United States of America and now only believed to exist in 130 miles (210 km) of the lower Alabama River. The fish has a distinctive yellowish-orange color, grows to a size of about 30 inches long and 2 to 3 pounds, and is believed to have a lifespan of 12 to 20 years. Biologists have known of the fish since the 1950s or 1960s, but the large diversity of aquatic species in Alabama prevented formal identification until 1991.

The Alabama sturgeon was first proposed for protected status in the early 1990s, although by then the fish was already so rare its survival was uncertain. The sturgeon's protection was opposed by a variety of industries located along Alabama's rivers for the feared economic impact. The opponents' main arguments were that it was already extinct or that it was not a distinct species. In response to this opposition, the U.S. Fish and Wildlife Service ceased efforts to place the fish on the Endangered Species List. Then Ray Vaughan, an environmental lawyer in Montgomery, Alabama, sued the Service and, in 2000, won, requiring Fish and Wildlife to list the fish for protection.

In 1993, state and federal biologists began a program to help save the Alabama sturgeon through a captive breeding program. Unfortunately, only six fish have been captured since then, all male. The last fish held in captivity died in 2002. The most recent specimen was captured in April 2007. After determining the fish was a male, sperm were collected, a small tracking device implanted, and it was released once it had fully healed. It was hoped that the tagged fish would lead to others of its species, but in a year of tracking to date, this has not happened.

In May 2008, the Fish and Wildlife Service proposed designating 245 miles (394 km) of the Alabama River and 81 miles (130 km) of the lower portion of its tributary, the Cahaba River, as critical habitat for the fish. Although the rivers are dammed at multiple locations, management of the river flows is expected to continue unchanged. A final decision on the habitat designation is due in May 2009.

All text in this article is licensed under the Creative Commons Attribution-ShareAlike License. It uses material from the Wikipedia article "Alabama sturgeon".