The white sturgeon (Acipenser transmontanus, meaning "sturgeon beyond the mountains"), also known as the Pacific sturgeon, Oregon sturgeon, Columbia sturgeon, Sacramento sturgeon, and California white sturgeon, is a sturgeon (a fish of the family Acipenseridae) which lives along the west coast of North America from the Aleutian Islands to Central California.

It is the largest freshwater fish in North America. A white sturgeon can weigh more than 1500 pounds (680 kg), and grow to 15 feet and can live well over 100 years.

The white sturgeon has a large, skinny and long body, head and mouth. This fish has no scales; instead it has large bony scutes that serve as a form of armor. There are 11-14 scutes in front of the dorsal fin, and none behind it. There are another 38-48 scutes on the side and 9-12 bottom scutes. The dorsal color of a White Sturgeon is gray, pale olive, or gray-brown. The fins are a dusky, opaque gray. The underside is a clean white. It has four barbels, used for sensing food, near its huge toothless mouth.

Sturgeons are classified as a bony fish, but actually are more cartilaginous than bony, their internal bone structure being more like a shark's. Sturgeon have changed very little since they first appeared, over 175 million years ago and thus have the appearance of a very ancient fish.

The white sturgeon lives on the bottom of slow-moving rivers, bays, and estuarine areas, including the brackish water at the mouths of large rivers. Other sturgeon will spend most of its time in a marine environment, only coming into rivers to spawn. They are well-adapted to finding food drifting by with their excellent sense of smell and taste. When there is an insufficient food supply, sturgeon have been known to move into shallow water to eat freshwater clams.

During the spawning season, the white sturgeon moves to clean, fast-moving areas of rivers, such as just below rapids, with gravel or larger rocks along the bottom. 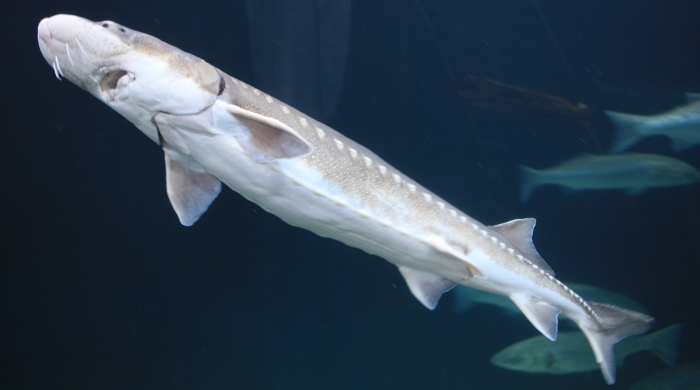 White sturgeon spawn many times in their lives. As they age, the females spawn less often, but produce more eggs in each spawning. In the late spring or early summer, they congregate in areas of rivers with a heavy current, gravel bottom, and a water temperature of 58 °F to 66 °F (14 °C to 19 °C). The fish broadcast spawn in these areas, with males releasing sperm as the outnumbered females release anywhere from 100,000 to a million eggs. The fertilized eggs then sink and adhere to the gravel at the bottom. The eggs are brown in color and will hatch in about a week, depending on water temperature. Female white sturgeon do not spawn every year.

Upon hatching, the larvae are around 0.5 in. (1.3 cm) long, with a tadpole-like appearance. They drift downstream with the current until they reach a suitable habitat. When the rearing habitat is reached, the larvae typically take around 25 days for the yolk sac to be absorbed. About a month after hatching, the sturgeon will have a full set of fins, rays, and scutes. As small juveniles, they feed on insects, small fish, and small crustaceans. Maturity is reached between 5 and 11 years, depending on the gender of the fish and the temperature of the water.

White Sturgeon can live to be over 100 years old. The rate of growth is dependent on water temperature. Typically, they reach six feet long around 25 years of age, showing that these fish do not grow as quickly as many other fish. White Sturgeon are anadromous meaning they spawn in fresh water and migrate to salt water to mature. Sturgeon may migrate in and out of salt water many times in their lives. However, since the building of many dams along the Columbia and Snake rivers, the populations above the dams have become landlocked.

A sturgeon's taste buds are located on the outside of its mouth. This, along with the barbels, allows it see if a possible food source is edible before sucking it up into its mouth. As adults, the white sturgeon's diet somewhat varies. This is dependent upon the river systems it lives in. In the Columbia River system, dead fish, crustaceans, and mollusks are all popular prey. Lampreys, primitive eel-like fish, come into rivers to spawn at the same time as the white sturgeon, and are a popular food source at that time. Smelt is another food that is abundant around spawning time. Shad come into the Columbia River system in throngs of several million each spring. The extremely large shad runs are often cited as an example of why the lower Columbia River has such a large population of Sturgeon. Like the smelt, these fish often die, and the remains are an easy meal for sturgeon. Shrimp is yet another prey of sturgeon, with sand shrimp being most common.

Impact of fishing and habitat change

Historically, sturgeon have been a very important fish, both commercially and for sporting purposes. At one point, sturgeon populations in all of the Columbia River system were threatened. This was caused by over-fishing for commercial purposes. A commercial fishery began in the 1880s. In 1892, this fishery reached a peak, when over five and one half million pounds (25,000 metric tons) of sturgeon were harvested. By the dawn of the 20th century, the seemingly endless supply of sturgeon was severely depleted. In the 1940s a six-foot maximum size restriction was put in place. The commercial fishing of white sturgeon has remained to this day and was valued at US$10.1 million in 1992.

Dams constructed along the Columbia and Snake Rivers has also become a threat to sturgeon. The dams block passage to and from the ocean leaving landlocked populations. The higher water levels have, as a result, destroyed areas that used to have rapid currents, eliminating spawning grounds. At this point in time, the only healthy population of White Sturgeon on the Columbia River and its tributaries is the lower Columbia River population. These fish are still able to move freely between marine, estuarine, and freshwater environments. All other populations have become landlocked because of the dams. These populations have suffered from the inaccessibility of many food sources, inability to migrate, and destruction of their habitat. As a result, none of the populations above Bonneville Dam are considered to be abundant but some do support fisheries. The Oregon Department of Fish and Wildlife has worked together with The Washington Department of Fish and Wildlife and the Columbia River Treaty Tribes to impose size restrictions as well as season and quota restrictions on all sturgeon caught in the Columbia River. The objective of size restrictions is to minimize fishing impacts on large sturgeon that comprise the spawning population. Poaching is also partly responsible for declining numbers.

Fishery management agencies have implemented more restrictive commercial and recreational fishing regulations such as closed areas to protect spawning fish in order to help protect this magnificent creature. These fishery regulations in conjunction with hydrosystem management actions taken by the Corps of Engineers and restoration funding provided by the Bonneville Power Administration will help alleviate the over harvest of Sturgeon and destruction of Sturgeon habitat.

Worldwide, sturgeon commercial fisheries use sturgeon for meat and eggs, the eggs being most sought after. Caviar is considered a delicacy in many parts of Europe and North America. In the Columbia River, size restrictions make it very unlikely any fishers ever legally retain egg bearing fish. The fish caught legally by sport and commercial fishers are too small and not yet sexually mature enough to make harvesting for eggs worthwhile.

The threat of toxin bioaccumulation is especially high in Sturgeon meat. Because of its eating habits, sturgeon accumulate toxins in its flesh as it feeds. They feed on any sort of organic material found while scavenging; this includes raw sewage, dead fish, paper mill wastes, and plants sprayed by pesticides. Dioxin is an unintentional byproduct of paper bleaching and pesticides. It is also one of the most commonly found toxins in fish populations. PCB is also found in fish. It is used as a plasticizor in paint, rubber, and plastic products. Before the government ceased its production in 1977, more than 1,500,000,000 pounds (680,000 tonnes) were produced. Mercury is one of the more commonly known toxins found in fish's flesh. Some have speculated that it is also the most dangerous. Sturgeon and other fish in the Columbia and Willamette rivers have registered 0.35 to 0.50 parts per million. Although most accumulation in Sturgeon happens in the liver, pancreas, and other organs; the toxins still accumulate in the edible flesh. The Oregon Department of fish and Wildlife has issued warnings on all fish caught in the Willamette River. For areas with high mercury levels: (Willamette and Lower Columbia Rivers) "Women of childbearing age, children under six, and people with liver and kidney damage should avoid eating fish from these waters. Healthy adults should eat no more than one eight ounce meal per month." Also for areas with high concentrations of PCBs, dioxins, and pesticides: (Willamette and Lower Columbia Rivers)

"All persons should reduce or avoid eating fatty parts of fish. Exposure can be reduced by removing the skin and all fat, eggs, and internal organs."

Fishing for sturgeon is still very popular in the Columbia River, Willamette River and Snake River. Current sport fishing regulations as imposed by The Oregon Department of Fish and Wildlife state that Sturgeon may only be kept if measuring between 42 and 60 inches (108-154 cm). In most years anglers may retain a sturgeon of said length only on a Thursday, Friday, or Saturday. Also, one may only use a single point barbless hook. Bait used for sturgeon is mostly its natural prey, although more unusual baits are sometimes used. These baits include cheese, anchovies, pickled squid, dog food, and cat food. A strong, 10-12 foot (3.1-3.7 m)long rod and heavy salt water reel spooled with 40-100 pound (180-440 N) test fishing line is used for bank fishing. For boat fishing a smaller 6-7 foot (2 m) long rod is used. Anglers vary the amount of weight used depending on how heavy the current is, anywhere from 6 to 16 ounces (210-560 g). Often, an angler will use a 10-12 inch soft braided leader to connect the weight to the hook. Sport fishermen divide the sturgeon into three classes: shakers, keepers, and oversize. Shakers consist of any fish under the legal size. They are so named for the way they fight, shaking the rod tip as they attempt to take the bait away. Keepers are any fish within the legal size requirement. Oversize, often called peelers, are any fish over the maximum size requirement of 5 feet (1.54 m). They are called peelers because of the way they "peel" line off of the reel. Many sturgeon fishermen target these exclusively. When sturgeon first encounter the bait, they "mouth" it, which is to say that they taste and feel it before inhaling it whole.

Non-Indian commercial fisheries for white sturgeon occur in the mainstem Columbia River downstream from Bonneville Dam. These fisheries use gillnets. Commercial sturgeon fishing may be done in conjunction with commercial salmon fishing or may be a targeted fishery. Release mortality on undersize and oversize sturgeon is estimated by state fish and wildlife managers to be low. Generally fisheries are managed with weekly landing limits per fisher. Green sturgeon are sometimes caught but must be released unharmed.

Tribal sturgeon fisheries occur in the mainstem Columbia River between Bonneville Dam and McNary Dam. Tribal fisheries primarily use gillnets and setline gear. Some sturgeon are caught with hook and line gear or hoopnets from platforms along the shore. The tribes have subsistence and commercial fisheries for sturgeon.

State and tribal fishery managers have experimented with spawning sturgeon artificially and raising sturgeon in hatcheries with the goal of releasing juvenile sturgeon in the upstream areas of the Columbia and Snake Rivers to help rebuild sturgeon populations in these areas. Initial results are promising, but no full scale hatchery production has been funded.

All text in this article is licensed under the Creative Commons Attribution-ShareAlike License. It uses material from the Wikipedia article "White sturgeon".