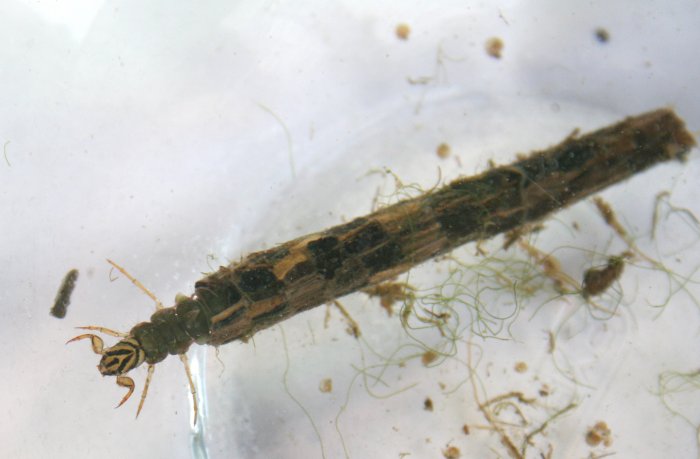 The caddisflies are an order, Trichoptera, of insects with approximately 7,000 described species. Also called sedge-flies or rail-flies, they are small moth-like insects having two pairs of hairy membranous wings. They are closely related to Lepidoptera (moths and butterflies) which have scales on their wings, and the two orders together form the superorder Amphiesmenoptera.

Caddisflies have aquatic larvae and are found in a wide variety of habitats such as streams, rivers, lakes, ponds, spring seeps and temporary waters (vernal pools). The larvae of many species use silk to make protective cases of gravel, sand, twigs or other debris. The name "Trichoptera" comes from Greek: θρίξ (thrix, "hair") + πτερόν (pteron, "wing").

Although caddisflies may be found in waterbodies of varying qualities, species-rich caddisfly assemblages are generally thought to indicate clean water. The caddisfly can be found in lakes, ponds, and marshes. Together with stoneflies and mayflies, caddisflies feature importantly in bioassessment surveys of streams and other water bodies.[3] Caddisfly species can be found in all feeding guilds in stream habitats, with some species being predators, leaf shredders, algal grazers, and collectors of particles from the watercolumn and benthos.

Most caddisfly larvae are underwater architects and use silk, excreted from salivary glands near their mouths, for building. Caddisflies can be divided loosely into three behavioral groups based on their use of silk: net-making caddisflies and case-making caddisflies, both of which may enlarge their structures throughout their larval lifespan; and free-living caddisflies, which only make such structures prior to pupation. Net-making caddisflies usually live in running water, and their nets, often made amongst aquatic vegetation, serve both as a means to collect algae, detritus, and animal food and as retreats. Case-making caddisflies may build cases exclusively of silk, but more commonly the silk holds together substrate materials such as small fragments of rock, sand, small pieces of twig or aquatic plants.

Caddisfly cases are open at both ends, the larva drawing oxygenated water through the posterior end, over their gills, and out of the wider anterior end. The anterior end is usually wider and it is to this end that they add material as they grow. Their abdomens are soft, but their tougher front ends project from their larval tubes, allowing them to walk while dragging their cases along with them. Caddisfly cases resemble bagworm cases, which are constructed by various terrestrial moth species. Free-living caddisflies do not build retreats or carry portable cases until they are ready to pupate, and their bodies tend to be tougher than caddisflies that build.

Many species of caddisfly larvae enter a stage of inactivity called the pupae stage for weeks or months after they mature but prior to emergence. Their emergence is then triggered by cooling water temperatures in the fall, effectively synchronizing the adult activity to make mate-finding easier. In the Northwestern US, caddisfly larvae within their gravel cases are called 'periwinkles.'

Caddisfly pupation occurs much like pupation of Lepidoptera. That is, caddisflies pupate in a cocoon spun from silk. Caddisflies that build the portable cases attach their case to some underwater object, seal the front and back apertures against predation though still allowing water flow, and pupate within it. Once fully developed, most pupal caddisflies cut through their cases with a special pair of mandibles, swim up to the water surface, cast off skin and the now-obsolete gills and mandibles, and emerge as fully formed adults. In a minority of species, the pupae swim to shore—either below the water or across the surface—and crawl out to emerge. Many of them are able to fly immediately after breaking from their pupal skin.

The adult stage of caddisflies, in most cases, is very short-lived, usually only 1–2 weeks, but can sometimes last for 2 months. Most adults are non-feeding and are equipped mainly to mate. Once mated, the female caddisfly will often lay eggs (enclosed in a gelatinous mass) by attaching them above or below the water surface. Eggs hatch in as little as three weeks.

Caddisflies in most temperate areas complete their life cycles in a single year. The general temperate-zone lifecycle pattern is one of larval feeding and growth in autumn, winter, and spring, with adult emergence between late spring and early fall, although the adult activity of a few species peaks in the winter. Larvae are active in very cold water and can frequently be observed feeding under ice. In common with many aquatic insect species, many caddisfly adults emerge synchronously en masse. Such emergence patterns ensure that most caddisflies will encounter a member of the opposite sex in a timely fashion. Mass emergences of this nature are called 'hatches' by salmon and trout anglers, and salmonid fish species will frequently 'switch' to whatever species is emerging on a particular day. Anglers take advantage of this behavior by matching their artificial flies to the appropriate fly.

Fossil caddisflies have been found in rocks dating back to the Triassic.

The pupal cases made by caddisflies can be viewed in terms of their fossil records that date back to 250 million years. Old groups of caddisflies are known to have a high level of diversity in their larval cases that are distinctive for each family or genus. For example, a suborder, Integripalpia, have cases that contain plant matter. Whereas the suborder Annulipalpia have cases made from silk and detritus. However, some caddisflies, specifically among the suborder, Spicipalpia, are free-living with no cases, instead creating a net-like trap with silk.

While caddisflies in the wild construct their cases out of twigs, sand, aquatic plants, and rocks, a French artist, Hubert Duprat, makes art by providing wild caddisflies with precious stones and other materials. He collected caddisfly larvae from the wild and put them in climate-controlled tanks. He removes the larvae from their original cases and adds precious and semi-precious items into the tank. The larvae then build new cases out of precious items, creating a unique form of artwork. These works are sold across the world and this technique of making art has been adopted by other artists.

All text in this article is licensed under the Creative Commons Attribution-ShareAlike License. It uses material from the Wikipedia article "Caddisfly".