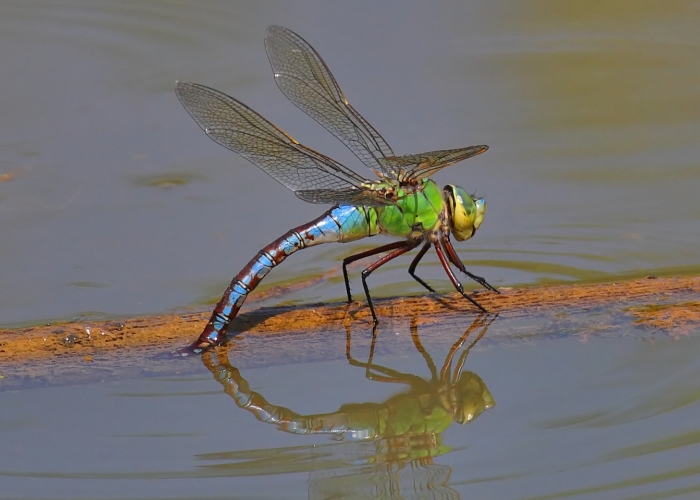 Aquatic insects live some portion of their life cycle in the water. They feed in the same ways as other insects. Some diving insects, such as predatory diving beetles, can hunt for food underwater where land-living insects cannot compete.

One problem that aquatic insects must overcome is how to get oxygen while they are under water. All animals require a source of oxygen to live. Insects draw air into their bodies through spiracles, holes found along the sides of the abdomen. These spiracles are connected to tracheal tubes where oxygen can be absorbed. All aquatic insects have become adapted to their environment with the specialization of these structures.

Some insects have densely packed hairs (setae) around the spiracles that allow air to remain near, while keeping water away from, the body. They may even carry a bubble of air down from the surface. Others have a plastron that can be various combinations of hairs, scales, and undulations projecting from the cuticle, which hold a thin layer of air along the outer surface of the body. The trachea open through spiracles into this air film, allowing access to oxygen. The larvaes and nymphs of mayflies, dragonflies and stoneflies still retain the air tubes they need for adult stage but when in larval stage they are equipped with gills that strain out oxygen in the water.

Though not as complex as the gills of a fish, some aquatic insects have modified structures extending from the trachea which allow the organism to exchange gases with the environment. Oxygen diffuses from the water into these gills and moves from there through the gills to the insect's body. Other aquatic insects can remain under water for longer periods due to a storage of oxygen. Insect hemoglobin has a strong attraction to oxygen molecules, and is carried in the hemolymph which circulates freely within the animal's body.

Orders with aquatic or semi-aquatic species

All text in this article is licensed under the Creative Commons Attribution-ShareAlike License. It uses material from the Wikipedia article "Aquatic insects".